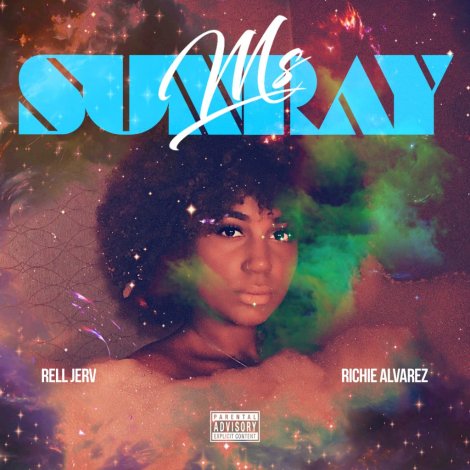 Definitely one to rock to, “Ms. Sunray” brings to mind the era filled with Outkast and Little Brother joints.

For the song, Rell collaborated with Richie Alvarez organically and came up with something magical, as told by him below.

Rell Jerv on the making of “Ms. Sunray”:

“Ms. Sunray” is one of my favorite records to date just because of the way it came together. I co-wrote this song with Richie and this is before we built our studio. So you had Rich, Scotti P, A.Jo and myself all in this really small room just trying to catch a vibe and when Rich did the ad lib in the beginning of the song it really set the tone. I am so grateful to him because he didn’t have to do the song but he is a person like me that only wants to make music at any cost, he was actually battling some health issues and could not even walk. So here is a guy that’s pushing himself around on a scooter, stuck in this small room with 3 other people just to make this happen and the way the song came together was so organic which is probably why it is one of my favorites.”

Listen to the new single below, courtesy of Spotify.

This site uses Akismet to reduce spam. Learn how your comment data is processed.

This blog is no longer active. Please feel free to look around and discover all of the dope artists we’ve covered since 2015.

To all of those who ever supported The Dope Show, we wholeheartedly thank you.

Join Us On IG

Grand opening, grand closing! It was a tough decision to make but The Dope Show is shutting down for good. For those who ever supported us, we thank you! Feel free to look around the blog and discover all of the dope artists we’ve covered since 2015. (Link in bio)
We just made a new section on the blog titled "Flint Is Active" that groups all the dope artists from Flint, Michigan together in case you'd like to explore exclusive coming out of this thriving music scene. We got our start in Flint and our heart will always go out to Flint. The link to the blog is in our bio. Enjoy.
Chicago duo Bye Dad (Louie Kason + Willie Main) drop their latest listen "Different Colors" that's a dope blend of atmospheric melodic lyricism. Stream the track on our homepage today (link in bio as always)

About The Dope Show

The Dope Show was created for today’s upcoming independent music artist who wants, needs and deserves a supportive online platform to be highlighted and featured on.

Our mission is to bring you the latest music, videos and interviews from noteworthy indie and underground acts from around the globe. We also aim to keep you in the know by providing exclusive, provocative think-pieces straight from the minds of our wildly dope writers.

If all of this intrigues you and you want to see more, then let the show begin.